With the increasing number of new breweries, it is strange to think that Twickenham Brewery is now one of London's oldest, having started in 2004. Walking into the their new premises, it becomes immediately obvious how much the Brewery has grown from its early days. In fact, their first brewery could just about have fitted in what appears to be an annexe to the main brewery.

They took over their new premises in March 2012 and started brewing the following December. Steve Brown, one of the brewery's founder, commented that the building was almost a shell, with few electrics and no drains and a floor that needed an overhaul. The new building is now big enough to fit in a 25 barrel plant (which uses gas to produce their steam) and three fermenters. But even this did not prove big enough with a fourth being added a few weeks ago, a reflection of the growing interest in London beers. They are currently brewing four times a week even in January due to Young's pubs taking their Grandstand beer. 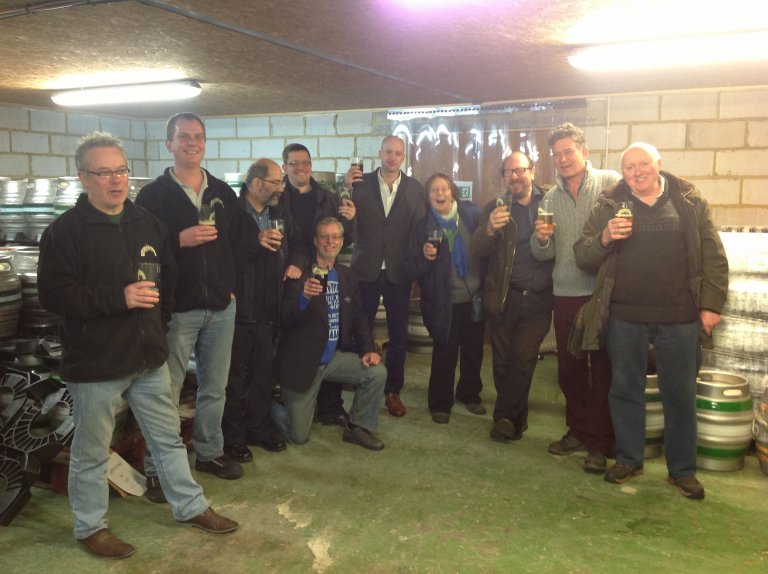 Tom Madeiros, who had brewed at Twickenham for many years left in July 2012. He was previously at the now closed Grand Union Brewery in Middlesex. Tom was succeeded by Stuart Metcalf ex WJ King (Sussex), assisted by Dave Hall ex Tripple fff Brewery (Hampshire). There has been a little tweaking of the beers and here was how the London Tasting Panel found them on their recent visit.

Sundancer 3.7%ABV: This was the second brew that Twickenham ever produced. After several recipe changes, the current one has reverted to one produced in 2007, when it won silver in the Champion Beer of Britain Bitter category. It uses Brambling Cross and Cascade hops with Pale, Wheat and Amber malts. There is fruit and a trace of hops throughout this refreshing bitter. The touch of honey sweetness is balanced by a dry bitterness that grows on drinking.

Grandstand 3.8% ABV: A traditional well balanced bitter, amber in colour, with biscuity flavours on the nose, palate and finish. Some floral hops are present. The finish is bitter with some dryness. The beer uses just one hop, Brewers Gold, and a mix of malts: Pale, Crystal, Wheat and Caramalt.

Red Head 4.1% ABV: This smooth chestnut brown best bitter replaced Vanguard in the range. It uses Pale, Roasted Barley, Crystal and Wheat. The hops are Spalt, which is a German hop, and Brambling Cross,creating a soft berry fruitiness aligned with a little peppery hop character. There is some toffee fudge in the flavour. The finish is short and bitter.

Naked Ladies 4.4%ABV: This beer won silver in this year's London and the South East Golden Ales category of the CAMRA's Champion Beer of Britain competition. A full flavoured beer with pineapple and citrus fruits throughout, balanced with a biscuity sweetness and a dry bitterish aftertaste. The malts are Pale, Crystal and Wheat with Pilgrim, Styrian, Chinook and Celeia hops.

NookSack 5%: This is a collaborative brew with Kissingate Brewery in Sussex. It is named after an Indian tribe located in Washington State, where the hops used in this brew comes from. NookSack comes from a place name and translates to "always bracken fern roots". It uses Citra and Mosaic hops and is dry hopped with seven American hops. Malts are Pale, Wheat and Amber creating a golden ale with Clementine aroma and flavour along with some peachy fruitiness, which diminishes in the finish. It was described as a 'basket of fruit'. There is a trace of bitterness that is balanced by a malty sweetness.

Black Eel 5%ABV: This beer's black colour comes from passing it through Carafa III. There is black treacle toffee and coffee on the nose, some caramelised fruit in the aroma and flavour fading in the aftertaste, which is satisfying and dry with some roast notes. The hops are Goldings and Fuggles.

Twickenham Brewery is now doing brewery trips so if this has prompted an interest, why not go along? They take place the second Wednesday of each month, lasts for 2 hours, from 7pm and costs £10/person. Booking is essential. See http://twickenham-fine-ales.co.uk/toursbar/