The dads have it at Belleville

Most brewers have interesting histories but very few can say that it was due to a number of dads and their love of good beer as the London Tasting Panel recently found out. 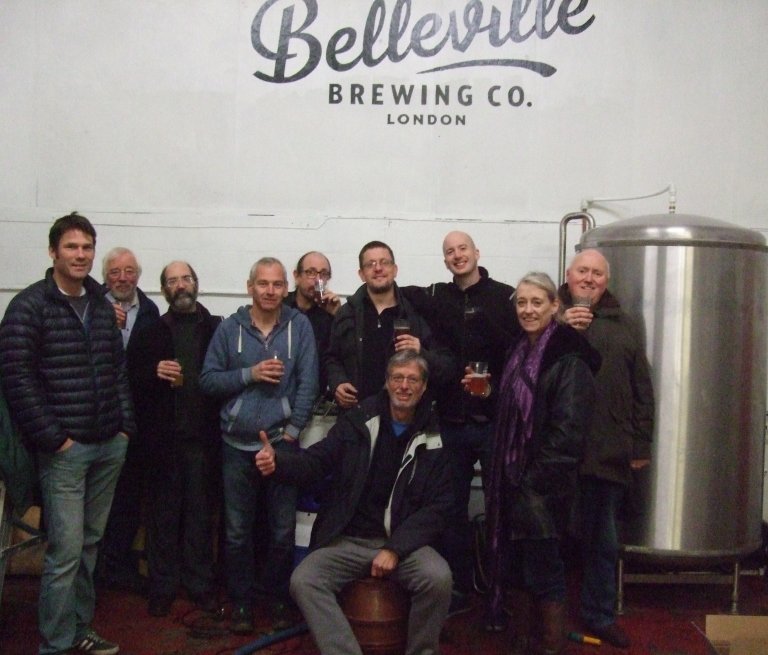 It all started off when Adrian moved into the Wandsworth area with his family and, to support the school that his child went to, he ran a beer festival to raise funds. It was such a success that it was decided to repeat it. Persuaded by friends Adrian decided to include some of his own home brew at a second event. He was blown away by the positive comments and started to think whether brewing might pay. There is no doubt that, to set up a brewery is a risk and for someone like Adrian with an -established career, it was a leap of faith. Adrian is a musician and composer by trade, having played with Mike Oldfield and latterly turned his talents to composing for the advertising industry including Guinness and the Yoda adverts for Vodaphone.

Adrian decided that he would like a 2.5 barrel plant but the numbers simply didn't add so he went for a 6 barrel one ex Oban Ales, although the usual brew length is 5 and they brew 2-3 times a week. There are currently 3 fermenters with a fourth due next year. But setting up a brewery doesn't come cheap and the investment came from dads at the school that Adrian's child went to and that he had fundraised for. It was this local school that gave its name to the brewery, Belleville, a name that is proudly painted on the wall at the back of brewery . But the name initially proved to be a problem with the InBev who own the Belgian Bellevue beers, who thought that the name was too close. Fortunately, one of the dads had a legal background and was able to resolve the issue and so they didn't have to repaint the sign!

All of the beers use American hops, a result of the multiple visits to the States and brewery visits that resulted in Adrian falling in love with the big, bold flavours. There are a number of standard beers with a number of seasonals, all linking to something associated with the season. Elderflower is the Spring beer, Red, Wheat and Blue, the Summer using American Blueberries, The Autumn beer is a Spiced Pumpkin and the winter, a Chestnut Porter.

The brewery aim is to eventually have a third bottles, a third real ale and a third keg. The beers tend to be found mostly south of the River and currently, not west of Wimbledon. They are members of the SIBA Distribution Scheme and use Boggarts and Pigs Ear distributors but deliver most of the beer themselves.

The beers that the London Tasting Panel tasted were:

Northcote Blonde (4.2%ABV): A dark golden ale with a sweet biscuity character. The fruit is of pineapple and orange and a mixed citrus finish. The trace of bitterness and hops balances the flavours creating a pleasant smooth drinking beer.

Battersea Brownstone (4.8%ABV): A complex beer with chocolate and blackcurrant notes on nose and palate coupled with a little malty sweetness and some date and vanilla flavours. Finish is hoppy and bitter.

Chestnut Porter (4.9%ABV): A dark brown beer with a creamy mouthfeel. It is made by infusing roasted chestnuts in the beer, which creates a nutty flavour. There are roast notes throughout and a little hoppyness and fruit. Faintly bitter on the short dry finish.

Commonside Pale Ale (5.0%ABV): A full flavoured golden beer with noticeable hops and fruit throughout. The initial palate is sweet but a bitterness develops, particularly in the finish.

Trick or Treat (5.4%ABV): A brown coloured spiced pumpkin ale with a cider-like nose and spices with honey sweetness throughout. Long lasting dry aftertaste. The spices are Allspice, nutmeg, cinnamon and ginger.

Thames Surfer (5.7%ABV): Strong pale brown IPA with citrus, honey and spicy notes. The flavour has hops and a sweet fruit character and a touch of honey, . There is a long lasting faintly hoppy bitter finish.