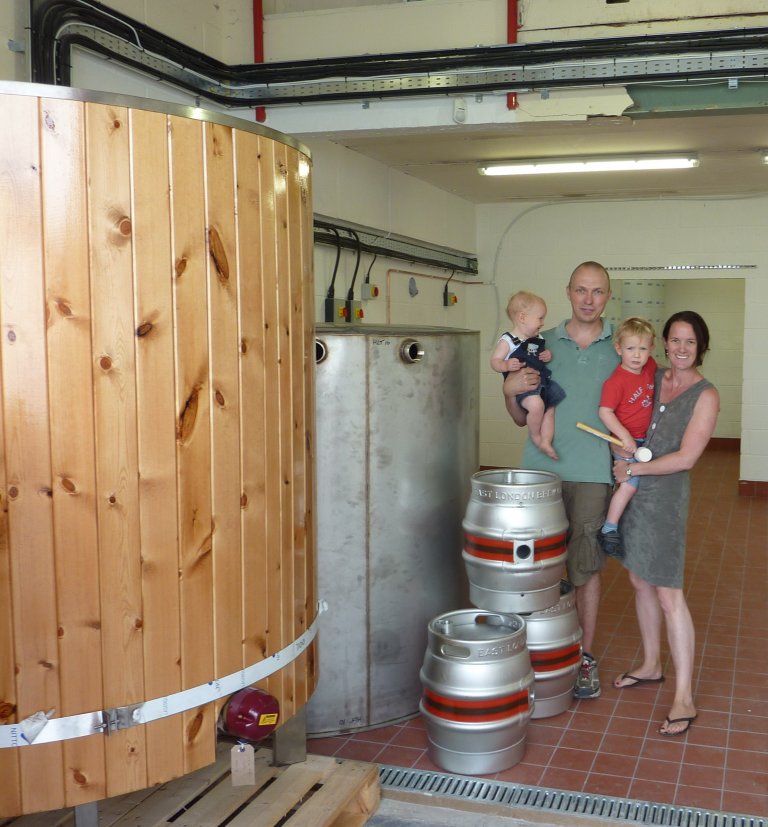 East London Brewery (ELB) is yet another brewery set on an industrial estate, hidden away, but CAMRA's London Tasting Panel recently took the time to seek them out and find out more. The brewery was set up in 2011 by husband and wife team, Stu and Claire Lascelles, with the idea of breaking free from the daily routine of work after the birth of their second child. So Stu found some premises in E10, gave up his day job as an industrial chemist, and started the building the brewery, aided by Claire despite a two year old and a baby of just a few months.

It is a 10 barrel plant and the demand for the beer has led to an expansion into a second unit next door, the installation of two more fermenting vessels plus a couple of extra employees and, earlier this year, Claire giving up her day job to assist in the brewery. Stu said he is lucky in that most of his customers come to him without him having to chase too much. There are currently around 150 pubs taking his beer plus a few off licenses taking his bottled beer (all hand bottled). There are around 60 regular outlets with around half of these taking their beers at least once a month. Stu puts this success down to his commitment to concentrating on beer quality so that his beers do not disappoint. To achieve this, the brewery concentrated initially on two beers, ensuring they got that right, before going onto the next recipe.

The first beer they brewed was ELB Pale Ale. A 4% ABV amber coloured best bitter using Maris Otter and Crystal malts with Brewers Gold, Styrian Goldings and Pilgrim hops, with the latter being used as the bittering hop. Stu commented that the first brew they did was too bitter and no aroma. Today's recipe creates a beer with a honey sweetness throughout that is balanced by hops, fruit and a bitterness that grows in the finish with some dryness. The hoppy notes are of a slightly perfumed character.

Shortly after a slightly stronger best bitter, Foundation Bitter (4.2%ABV) was brewed. Once again, the malts are Maris Otter Pale and Crystal, producing a pale golden brown beer. There are peppery hops overlaid with fruit and fudgy toffee flavours. There are also some faint orange peel notes, which fade in the aftertaste, which is dry. The hops are two from New Zealand: Pacific Gem (as the bittering hop) and Green Bullet plus Styrian Goldings, and East Kent Goldings.

The third beer that year was a darker beer, Nightwatchman, which was produced in the following autumn. There is a nuttiness in the palate with sweet caramelised fruit that diminishes in the aftertaste, which is complex with just a hint of treacle and some dryness. The hop character is pleasantly peppery. The smooth rich mouthfeel helps to explain Stu's comment that this 4.5% ABV beer sells better in the winter. The malts are Maris Otter, Crystal, Black, Munich and Caramalt; the latter two add to the sweetness. The hops are Brewers Gold, Styrian Golding, WGV and Magnum, as the bittering hop. The beer is dry hopped in the fermenting vessel with Brewers Gold.

There was then a gap in developing new recipes and it wasn't until the following summer that a golden ale, Jamboree, was added. This was a collaborative brew with some home brewing champions and Steve Taylor, ex Masons and Taylor. It is a 4.8% ABV beer with fruit with lychee and caramelised orange notes, a little peppery hop in the flavour. The aroma has malt, fruit and hops that are also present in the finish, which is bitter and slightly dry. Besides the Maris Otter, there is a lager malt and some wheat, for head retention. There are four British hops: Brambling Cross, Fuggles, Northdown (which is added late for the aroma) and Target, which is used for its bittering qualities. The final addition to the permanent portfolio was Orchid, a vanilla mild, black in colour and at 3.6% ABV, the weakest beer in the ELB portfolio. The vanilla pods are chopped and put in at the end of the boil and in the fermenter resulting in vanilla in the aroma with more subtle in the flavour. Originally, they tried putting the pods in the cask but they ended up getting stuck in the cask washer! Besides the vanilla, there are roast notes and a little fruitiness. The finish is of dark roast, which adds a little burnt bitterness. The hops are Challenger, as the bittering hop, and Brambling Cross as the late hop. The malts are Maris Otter, Amber and Munich and there are Flaked Oats and Wheat.

If you are interested in finding out more about the East London Brewery, in visiting the brewery or in buying their beer directly from them visit: eastlondonbrewing.com. A hidden gem, worth finding.