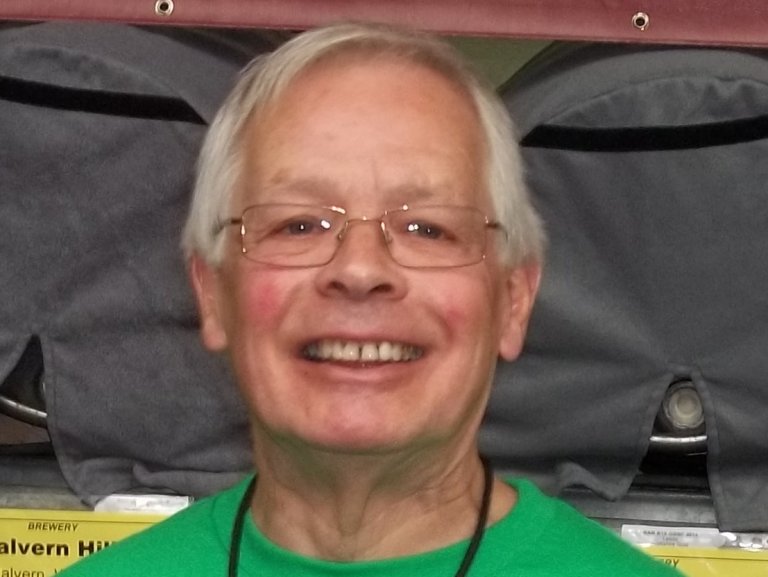 It is with immense sadness that I must report the passing of my friend and colleague Brian Lawrence, who is pictured above. Brian did not survive heart surgery.

Brian was for many years an active member of CAMRA’s West Middlesex branch. He was chairman from 2001 to 2007, at one point causing a certain amount of controversy by putting only four pubs and two clubs into the Good Beer Guide. Good Beer Guide ‘slots’ are very precious to CAMRA branches but Brian could not countenance any pub going into the Guide unless it fully merited it. That was very much the measure of the man.

After a break, Brian returned to the committee as Campaigns Officer, what we now know as Pub Protection Officer. The fact that the Greenwood Hotel in Northolt, as featured recently in these pages, has reopened in all its glory will remain his legacy, thanks to his lobbying of Ealing Council to stop its new owners destroying the splendid interior.

Brian also ‘did his bit’ at CAMRA beer festivals. At various times he worked on the foreign beer bar, was finance manager and a deputy bar manager at Ealing Beer Festival, both when it was in the Town Hall and when it went under canvass. He also regularly worked at the Great British Beer Festival, on the bar managed by Bobbie Scully in the company of a number of other London CAMRA members. It was here in 2014 that Roy Tunstall took the photo.

Worth a mention is the beer scoring system that Brian help develop for West Middlesex Branch long before the advent of CAMRA’s National Beer Scoring System. It was called UPOGS, which stood for ‘Undrinkable, Poor, Ordinary, Good, Superb’.

I got to know him later on as an occasional and welcome contributor to this magazine but more importantly as our distribution coordinator. This totally unglamorous but vital role involves contacting CAMRA’s thirteen Greater London branches to find out how many copies of London Drinker they will need for each edition so that we can calculate the print run and then making sure that the copies delivered go to the right homes so as to avoid wastage. It sounds easy enough but believe me, it isn’t. Brian however tackled the job with his customary diligence and precision when some of us might have just thrown our hands up and walked away. He will be very hard to replace. That said, most copies of the magazine are delivered to the Royal Oak in the Borough, a pub which Brian very much liked along with its Harvey’s beers

Away from CAMRA, Brian was a brewery tour guide for Fuller’s for many years, something I know that he very much enjoyed. As you would expect, he knew his stuff. He didn’t remain completely neutral however. It was on one of these tours that he recruited Jon Hart who is the new deputy organiser of Ealing beer festival – another part of Brian’s legacy. A while back, Brian also solved a great problem by recruiting his wife, Zainul, as treasurer for CAMRA’s Greater London Region at a time of some need.

Not that Brian’s life revolved around CAMRA and beer. He travelled widely. The last time we met for a beer he was on his way to collect his tickets for a trip to India. He was also a regular at the Keswick Jazz and Blues festival and this was a part of the world that I know he loved. He was also a regular at the Edinburgh Fringe for the comedy events. This diversity is echoed by the choice of charities to which donations should be made instead of flowers: Blind Veterans UK, The Bat Conservation Society and The Salvation Army.

Brian’s funeral was due to be held just as we went to print and I’m sure that CAMRA will be well represented. We all send our condolences to Zainul and family and will do our best to give him the send-off he deserves. Apart from thanking Roy Tunstall for his help with this tribute, I’ll leave the last word to former CAMRA Greater London Regional Director, Steve Williams, “Brian was a great support during my time as RD. He was a man who truly understood that the C in CAMRA stands for Campaign.” Brian will be missed