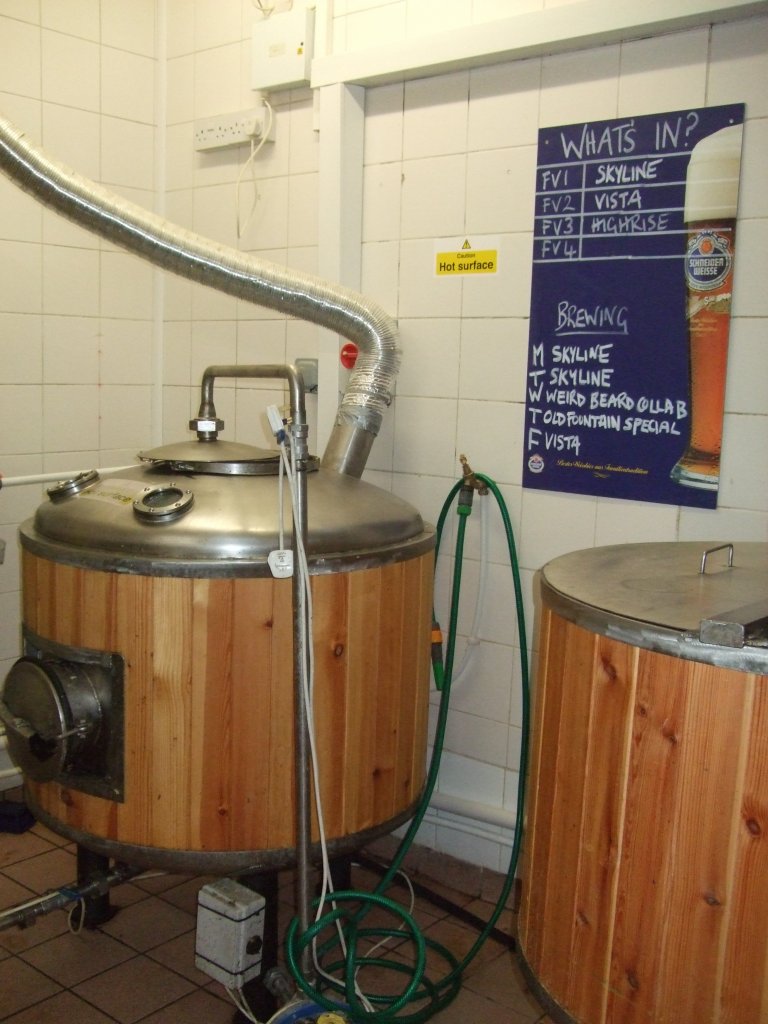 After several years of running the White Horse at Parsons Green, Dan Fox came north and took on the Bull in North Hill, Highgate in August 2011. As part of the refurbishment, Dan decided to include a micro brewery, just a two barrel plant, and the London Brewing Company was born.

The brewing takes place three time a week in part of the kitchen. The three fermenting vessels and cask storage is down in the cellar. After the fermentation, the beer is racked into casks and then is stored for 6-7 days to allow conditioning. The beer is popular and a cask will turn over in 3 days or less. The majority of the beer is sold in the pub although you can occasionally find it in other Highgate pubs and the White Horse in Parsons Green as well as selected beer festivals including the forthcoming London Drinker Beer & Cider Festival.

The beer range have changed a bit since the original brewing but Beer Street (their best bitter at 4%ABV) has remained throughout albeit with a bit of tweaking as a new brewer has come on board. It still remains their best seller. Their other regular beers are Vista, Skyline and Highrise. In addition, there are seasonal beers and the odd collaborative brew with other London brewers.

The pub, which can be food orientated much of the time, leaves little room for brewery expansion but they do have a fourth fermenting tank, which would help with supplies, if only they can find enough space to install it. The other option they are investigating, is the purchase of second pub, also with a view to installing a small brewery. They would then look at each brewery having a core range and exchanging seasonals and one off brews. The hope is that this would be a beer led pub ie something different from the Bull.

The Bull looks to add something different to their neighbourhood. Besides the Monday Pub Quiz, Tuesday has a knitting group and the pub also provides a 'post box' service for its customers. If you are out and about during the day, you can arrange to have your parcels delivered to the pub and pick them up from there. They also provide a dry cleaning service. See their website for further details: http://thebullhighgate.co.uk. With this community approach, perhaps then it is not surprising that the pub is just about to be awarded the North London CAMRA's Pub of the Winter Season on Tuesday 26th February. Why not go and join them and try some of the beers?

The regular beers: Highrise (3.9%ABV): A golden ale with lemon citrus notes and a touch of green grass on the finish. Two hops are used, both American: Cascade and Columbus.

Beer Street (4% ABV): A brown traditional best bitter. The British hops (Challenger and Fuggle) are present on the nose and palate with a lingering bitterness. There is a little biscuity character throughout.

Vista (4.4% ABV): A copper coloured smooth beer with a fudge flavour balanced by citrus fruit (from the Cascade hops) and some roast notes. The malts are an unusual blend of Caramalt, Cara Red (which gives the reddish hue) and Carafa. The latter is a chocolate malt, which gives the roasted flavour.

Skyline (5%ABV): Similar to Highrise but stronger and with addition of a third hop, Calypso, which again is American.