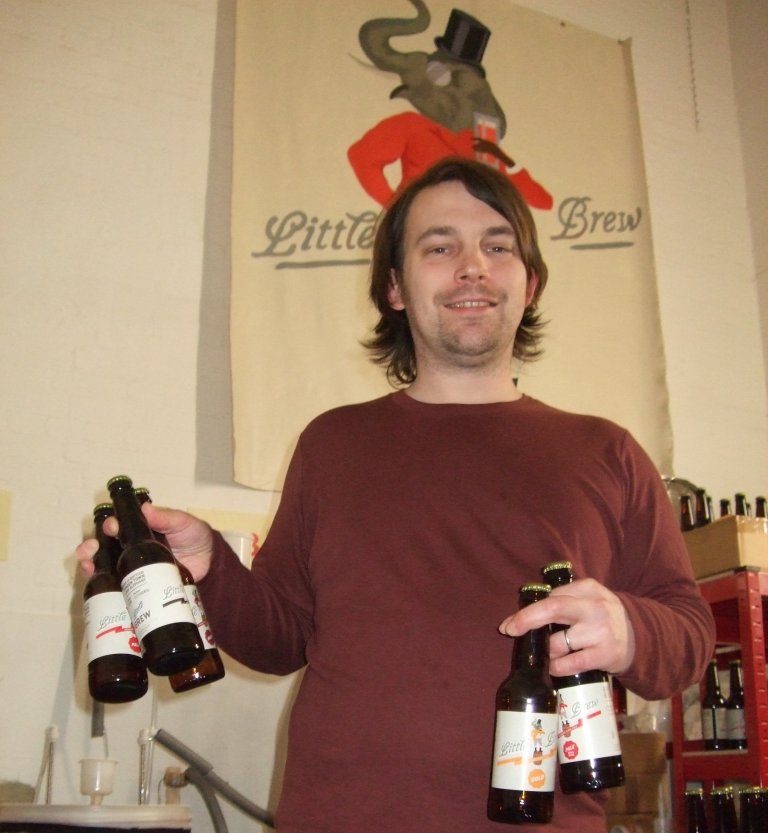 Since writing this article Stuart moved his brewing to York.

Hidden away down the back streets of Camden can be found London's smallest brewery. With just a one barrel plant, Little Brew certainly reflects its name. Stuart Small, the owner and brewer, set up the brewery in early 2012 after he decided to leave behind his life in environmental sustainability (as part of the British Soft Drinks Association) and went on a BrewLab course in the North East.

Alongside the copper are four 1 barrel fermenters, cases of beer and empty bottles - all fitting into a space about the size of a large sitting room. The centre of the room has a large table where the bottle capper sits a hand's reach from the manual bottle filler. Dominating it all, on the wall, is a large Little Brew sign sporting the Brewery's logo, a well dressed elephant. The elephant connection is that Little Brew is just around the corner from the long defunct Elephant Brewery, one of the only remnants of which is the Elephant's Head pub.

Stuart has spent the last year developing his recipes. The aim was to create beers that 'people can drink, time and time again'. Little Brew's focus is on bottle conditioned beers (beers which are unpasteurised and undergo a secondary fermentation in the bottle) and there are currently five beers in the range, with a couple more to be developed. The one Stuart is working on at the moment is a wheat beer.

The regular outlets are local and most can be delivered to on foot, saving fuel costs. One of the furthest away is the People's Supermarket in Holborn a few doors down from the Lamb in Lambs Conduit Street. You can also find the beer in a few pubs including the Black Heart (Camden), Tapping the Admiral (Kentish Town West) and the Lock Tavern (Chalk Farm). Stuart does have an off license so if you are interested in obtaining beer from him, contact him via his website: www.littlebrew.co.uk.

Currently all the beers are in 330ml bottles, which he chose as an accessible size. Stuart is hoping to increase his brewing to twice a week and then think about offering a range of bottle sizes. But unlike many brewers in London, Stuart is adamant that he will remain true to his name, and remain, a Little Brew.

Gold (4.2%ABV): A dark gold beer with a soft fruitiness with a hint of pineapple. There is a malty sweetness throughout and just a touch of dry bitterness in the finish. The hops are British (Progress and Brambling Cross).

Pale (4.6%ABV): Refreshing amber coloured best bitter with a smooth mouthfeel. Hops and fruit on the palate fade in the aftertaste, which is quite bitter but is balanced by some biscuity malt. The Brambling Cross hop gives some blackcurrant notes on the nose and Admiral and Whitbread Golding Variety hops add some complexity to the flavour including a little peppery character.

Porter (4.8%ABV): Roast, rich caramelised fruit and hops are present throughout in this smooth, traditional dark brown porter, which uses two British hops (Whitbread Golding Variety and Pioneer). The enticing aroma has a touch of liquorice and the finish is dry and bitter. The high carbonation coupled with the sweetness adds to the drinkability.

Ruby (5.6%ABV): A brown beer with red hues and a creamy mouthfeel. There are raisins and chocolate notes on the nose, palate and finish, which has a roast, bitter character. The beer uses three British hops: Pioneer, First Gold and Target.

Pale Extra Tusk (6.8%ABV): This is the big brother to the Pale Ale. A barley wine with strong bitter characteristics. The mouthfeel is rich and creamy. There is a orange fruitiness with some tropical overtones and a honey sweetness but the aftertaste is bitter and dry. Beware, the high carbonation reduces the apparent strength of the beer making it very drinkable.